Horner OCS application in the Production of Hydrogen 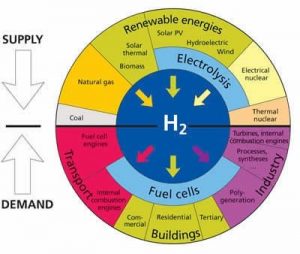 Hydrogen production is a large and growing industry. Hydrogen economy is a potential fuel for motive power (including cars and boats), the energy needs of buildings and portable electronics. It is also used widely in industrial production of various chemicals with ammonium products. In the environmentally conscious philosophy of the changing world, it has a pivotal role to play in the green and clean industry.

The utility of a hydrogen economy depends on issues of energy sourcing, including fossil fuel use, climate change, and sustainable energy generation.

Our customer in Italy chose to use OCS to control the plants from very small size and production to big systems for Hydrogen production for many different reasons, starting from the scalability of the systems.

They use the OCS range of products starting from the small XLT monochrome unit, readable in full sunlight thanks to the transflective Touchscreen up to the new powerful XL4, XL6 to end with the 12″ QX, a real Control Room unit.

Our customer started with a medium size Electrolyser system for Production of Hydrogen for Fuel Cells using a combination of XL6 & SmartMod devices over MODBUS-RS485, and later on added some SmartStix Digital IO mainly for relay output and digital inputs connected to the OCS over the CsCAN network.

This solution allowed the customer to optimize costs, quality and
performance.

The customer also used the uSD slot for data and alarms logging and Ethernet or GSM/GPRS connection for Remote control via Envision RV or data collection with FTP server on Ethernet units or Envision FX for serial or modem connection. 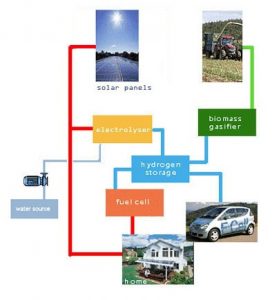 The graphic shows an example of an Electrolyser system which uses power generated from Solar Panels to carry out the Electrolyzes of De-mineralized water sourced from a tank. Thus separating with a Electrolyzer membrane stack Oxygen and hydrogen, Hydrogen Gas can be used for various purposes as described in the hydrogen economy whileOxygen can be purified and used on other applications.
Hydrogen is stored in a Storage Area and passed on to produce Fuel Cells.
The Electrolysis process requires being exceptional in terms of the quality of Oxygen and Hydrogen produced. 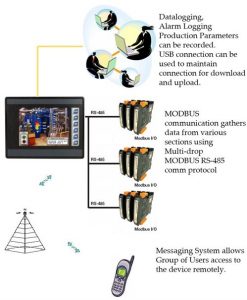 Horner OCS XL6 in this example is used to co-ordinate the functioning of the various sections.

The De-mineralized water is sourced from the pump and involves various operations with respect to load sharing and redundancy amongst the set of pump present.

The Electrolyser has several Level measurement in the H2 and O2 tanks and activates valves at the Electrolyser module. Based on power supply and output production request, Pressure combined with Temperature control in the line has to be qualitative in order that the Electrolysis is carried out at optimum level.

The H2 produced is then collected in the Hydrogen Storage Area and passed to the further steps for utilization in Bio-mass production or used as Fuel Cells.

All the different sections are connected using CsCAN and MODBUS RTU using SmartMOD or SmartStix devices from Horner APG.