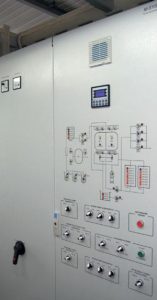 This project consisted of modernisation of an automatic water plant system and installation of a modern energy cabinet equipped with a new control system based on the compact yet powerful XLE from Horner.

The previous solution to measure tank levels which caused many problems and did not work reliably was replaced by a set of professional level sensors. The old electric cabinet was removed and in its place a new, modern one was installed. The main intent of the modernisation was to reduce the failure rate of the station which directly reduced the number of maintenance calls and also significantly raised customer satisfaction. Another equally important goal was to reduce energy consumption, thus improving environmental and economic performance

The first objective (to reduce the failure rate) was achieved by:

The second goal of reducing the energy consumption and increasing the energy efficiency of water treatment plants has been achieved through:

As a result of the modernisation and thanks to the applied solutions, engineers were able to achieve significant energy savings, reduce the number of maintenance services and increase customer satisfaction.

The information recorded by the maintenance team states that the number of weekly maintenance visits to the station has been reduced from several per week to a single control check. More importantly, they achieved savings in energy consumption: before the upgrade the average monthly energy cost was about €1,450, after, in the peak of water demand, the energy cost was about €1,130.

The results demonstrate that the modernization of the Water Treatment Plant resulted in energy savings of 22%. With this performance improvement, the investment will pay for itself in just three years of operation.

The complete control system, together with training sessions and necessary support were all provided by Astor (www.astor.com.pl), Horner’s authorized distributor in Poland.